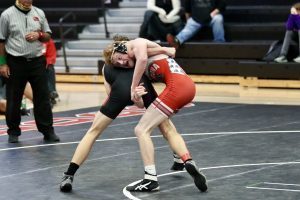 As the 2021 year started, the Algona wrestling team started getting back to action. The wrestling team was 10-0 before break, and the Dogs planned to come back with the same attitude after break.

The Bulldogs then hosted Clarion on Thursday, January 7th, and lost 21-51. The Bulldogs were led by Riley Goche, Hunter Berry, and Jake Zabka. Berry and Zabka both won by a fall while Goche won in overtime. Heading back down to Webster City on Saturday, January 9th, the Dogs wrestled Webster City and Greene County. Their first dual was against Webster City. After a hard fight, the Dogs lost 49-24 but beat Greene County 40-37.

The Bulldogs traveled to Estherville on Tuesday, January 12th, to wrestle Estherville and Okoboji. The Dogs wrestled Estherville first and won 76-6. Then they wrestled Okoboji and won 51-21.

The Bulldogs were supposed to travel to Fort Dodge to wrestle St. Edmond and Hampton on Thursday, January 14th, but the meet was postponed due to bad weather.

The Dogs traveled to Eldora on Saturday, the 16th, for the South Hardin Dual. The Dogs had a great day, placing 3rd as a team. The Dogs had two first place winners: Jake Zabka and Brandon Harris. Hunter Berry, Ian Fehr, Spencer Long, and Logan Meendering placed 2nd, and Dane Kitzinger placed 3rd.

The Bulldogs travel to Rockford on Tuesday, January 19th.

To keep up with all of the action, be sure to follow the Algona High School Wrestling Facebook page and watch them live.