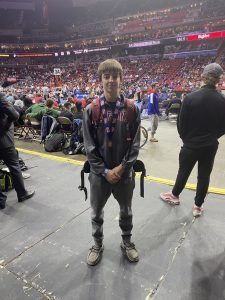 On Saturday, February 15, 2021, four wrestlers from Algona High School traveled to Humboldt for Districts. Those wrestlers were Jacob Zabka, Reece Eakins, Brandon Harris, and Logan Meendering. Districts is what determines who travels on to State or not. If wrestlers place first or second, they move on. If not, their season is finished.

Jacob Zabka won his first match and his second match, which made Zabka the winner of his bracket. Reece Eakins, Brandon Harris, and Logan Meendering all lost their first matches and also lost their second matches, which put all three of them in fourth place.

The only one placing high enough in Districts, and being able to move on to State was Jacob Zabka.  The State tournament started on Thursday, February 18th and went until Saturday, February 20th.

Zabka lost his first round at State but went back and won his second match on the first day. Since he won the second round of State, this allowed him to place no matter what. The third and last day of State, Zabka won, which put him in seventh place overall at 106 pounds in class 2A.

Jacob Zabka said, ”It was a great experience and I can’t wait to go back next year and hopefully do better.” Being only a sophomore, the future looks bright for Zabka!