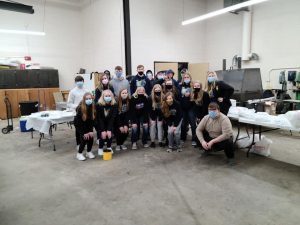 FFA members who helped with the drive-through pancake feed pose for a picture after a successful night.

Some things Algona High School did for FFA week include a game that has been played for years. Little blue blocks are hidden around the school and students try to find them. If the students get lucky enough and find one, they have to answer the question on the block to Mrs. Becker. If they answer the question correctly, they receive a prize from the chapter.

Some other things Algona did during the week is having students participate in dress up days. The dress up days this past week were: Monday was Blue and Gold Day, Tuesday was Chapter T-shirt Day, Thursday was Tie Dye Day, and Friday was Flannel Day. There were many students parading their FFA pride around the school this past week.

The traditional pancake feed was held on Tuesday, February 23rd. Instead of a dine-in experience and labor auction included, like in the past, this year it was a drive through event. Cars made donations to the FFA Alumni Foundation scholarships and received their pancake meals in to go boxes by Mrs. Becker’s shop. Over 300 plates were served! The labor auction was not held this year.

Overall the week was a success!