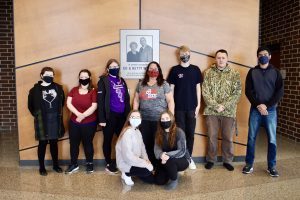 Algona High School provides a variety of different after school activities that deserve to be recognized. An activity that really deserves recognition for their hard work is Academic Decathlon, an extracurricular activity full of brainiacs with a thirst for victory.

In Academic Decathlon, students collaborate with each other to study different subjects that add to the theme that was set for that year. The subjects include math, economy, music, art, literature, science, and social science. This year, the theme was the Cold War. With all of their collective knowledge on each subject, the students, who are split into teams of Honor, Scholastic, and Varsity, take a test independently. They also partake in an interview, perform a planned and impromptu speech, and write an impromptu essay. Their essays were written on February 18th. At the end of a long day of tests, the students get their results and awards.

This year’s team of big brains include Harsh Modi, Hailey Benjamin, Faith Huber, Riker Brindley, Averie Cunningham, Ryan McCauley, Kaitlyn Wilsey, Wyatt Struecker, and Willow Kent. On January 28-29, the team got together for Regionals, remotely, and, in the end, many of the students at AHS placed highly. In the Honor division, Harsh Modi placed bronze in both math and economics. In the Scholastic division, Averie Cunningham placed silver in math and Ryan McCauley placed bronze in economics and interview. In the Varsity division, Wyatt Strueker won gold in science, silver in art, and bronze in math.

Make sure to congratulate the Academic Decathlon team for their achievements and wish them luck in their upcoming State competition. Also, don’t forget to say thank you to Coach Votteler, for it’s her last year of coaching.