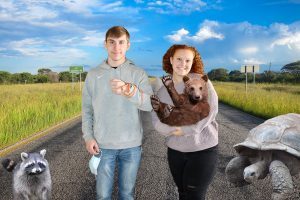 Riley Goche and Ruby Mitchell won the most likely to bring home a pet from the side of the road category.

The results for the annual “Seniors Who Are” categories included in the yearbook for the class of 2021 are in! Mrs. Spear’s journalism class previously teamed up to create topics for the senior class to vote on this year. Without further ado, let us award the recipients!

First, the winners for most likely to bring home a random pet from the side of the road are Ruby Mitchell & Riley Goche. The best bromance award goes to Noah Nelson & Kyle Simpson. Most likely to cure Corona is obviously granted to Carley Mullins & Dylan Berte. Most likely to be late include Josie Wiita & Aaron Weringa. Tallest and shortest of the grade, without a doubt, are Grant Oftedahl & Emma Zabka.

Congratulations to all of the 2021 winners for “Seniors Who Are. . .” at Algona High! Be sure to purchase a yearbook to see all of their Photoshoped pictures!