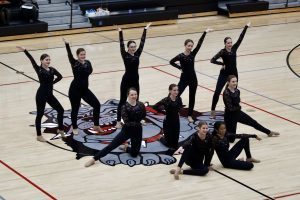 Dancin’ the season away

The dance team recently showcased their multiple routines from this year at the end of February. The girls held their annual Spring Show to end their season, and it was quite a success. The team performed their State pom routine, basketball routines, and State solos.

Although the crowd loved the well rehearsed State routines, everyone got a laugh out of the fun routines. Dancers taught one of their friends a beach themed routine that got to be performed at the show. The dancers also tried their best to teach one of their guy friends how to dance, teaching them skills like a toe touch, a double turn, and even a kick line. The guys did their best and it was very entertaining to watch. To close the show, the team did a senior farewell routine, saying goodbye and good luck to their two seniors, Jasmyne Harrison and Dionna VanGorkom.

The girls had a great season, and dance member Danica VanGorkom states, “I always had the best time during dance team practice. From laughing with teammates and messing around, to working hard and seeing it pay off at State, I couldn’t have asked for a better season. I can’t wait for next year!”

The girls are now done with their 2020-2021 season. Tryouts for next year will be held in late spring.