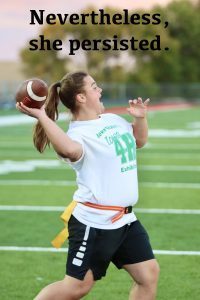 March marks the beginning of Women’s History Month.  This month is dedicated to billions of women across the world who work hard in their day-to-day lives and careers.

For too many years, women were oppressed and unable to be seen as equal to men.  They were silenced when they spoke up about what they believed, denied an education, and were viewed as property.  The Women’s Rights Movement began in 1848.  When looking at the big picture and how long men have had their rights, women have barely even began to have rights themselves.

Today, women still face struggles.  In some jobs, women are paid less than a man who does the same job and same amount of work.  In some circumstances, women are sexually abused and assaulted and then silenced out of fear and shame.  In some places, women are told they cannot do anything they put their mind to.  In some countries, women are not allowed to drive or choose their spouse.  Recognizing these terrible situations that too many people face today is a great start to realizing how powerful and strong women around the world are.

Many women today still face inequality because of their sex.  Make an effort this month, and all year, to appreciate the women in your life and thank them for all that they do and go through.