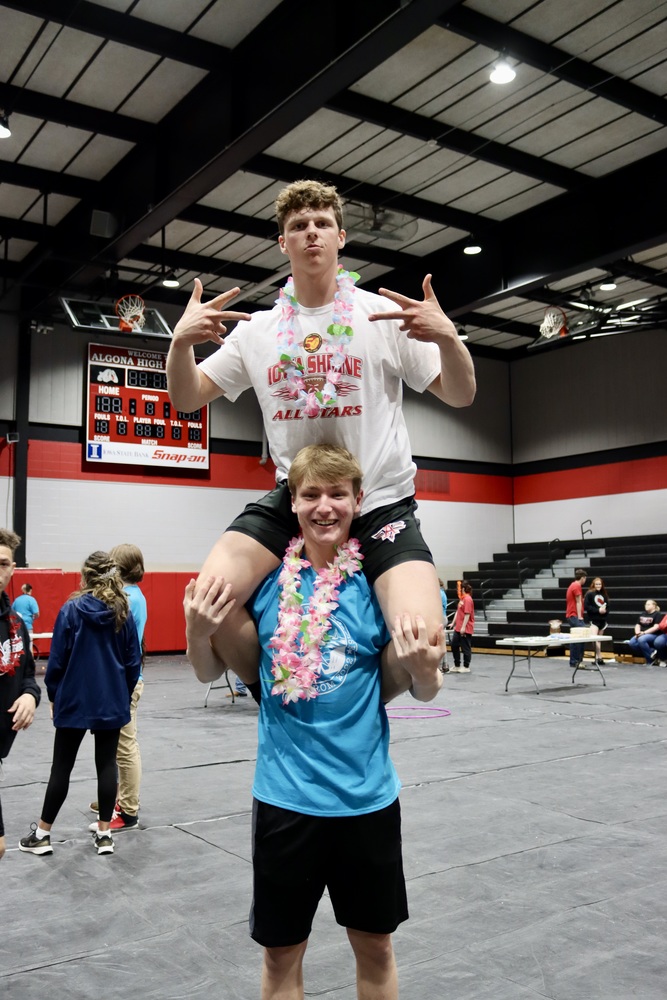 Prom at AHS was held on Saturday, April 23rd. The event was a great success! To start the evening off, everyone pulled up with their nice cars, or their normal school car, but with style. All Prom attendees were excited to see each other in their dresses and suits. Even parents, other family members, and friends were excited to see everyone all dressed up. During social hour, before Grand March began, everyone was busy socializing and taking pictures. When the time came for the Grand March, everyone was ready to walk across the stage!

Algona High School juniors and seniors, along with their dates, all looked amazing and stunning for Grand March. Though it was nerve wracking for some, the cheering from the crowd, friends, and family made it all better for everyone. Senior, Jackson Cecil, encouraged the Prom attendees to, “Get griddy with it.”

After seeing everyone walk the stage and the nonstop cheering, all parents, friends, and other family made their way out so that the dance could start. Let it be known that everyone had an incredible time. The DJ, who was incharge of playing the songs, was one that all the Prom attendees loved and appreciated a lot. Almost everyone got up to dance or sing to the songs at some point or another throughout the night. The time flew by. For most it didn’t feel like two hours. Some thought it felt like just thirty minutes! Senior, Alasha Heenan, states, “I had a lot of fun dancing with my friends, especially singing along to ‘Mo Bamba’ with everyone!”

As the night was somewhat getting closer to an end, everyone was getting tired. After changing into their comfier clothes, everyone still had the energy to eat, the only thing that kept most people up. Aside from that, there were ticket raffles for all juniors and seniors to participate to have the chance to win something from the prize table. The tables had essential and just for fun items. Prizes included: TV, Airpods, little kits, etc. For those who surprisingly still had energy, there were games available for anyone to play. Dodgeball, Nerf gun wars, bags/corn hole, ping pong, etc. were all offered. For those who played the games, they had a fun time doing so. Junior, Caleb Omdahl, states, “I didn’t expect Ty to jump on my shoulders.”

Then, the exciting moment came. The hypnotist! This was a great way to end the night. Everyone had lots of laughs during the show. The hypnotist even had the people who he had hypnotized interact with the crowd and it was something that had everyone constantly laughing. After the people who had been hypnotized become un-hypnotized, they had no memory of it. Senior, Ryan McCauley, was a participant and she states, “I thought it was a really fun experience. I’m happy that I did it!”

For most, Prom 2022 was a memorable experience and hopefully a night to remember for the graduating seniors!