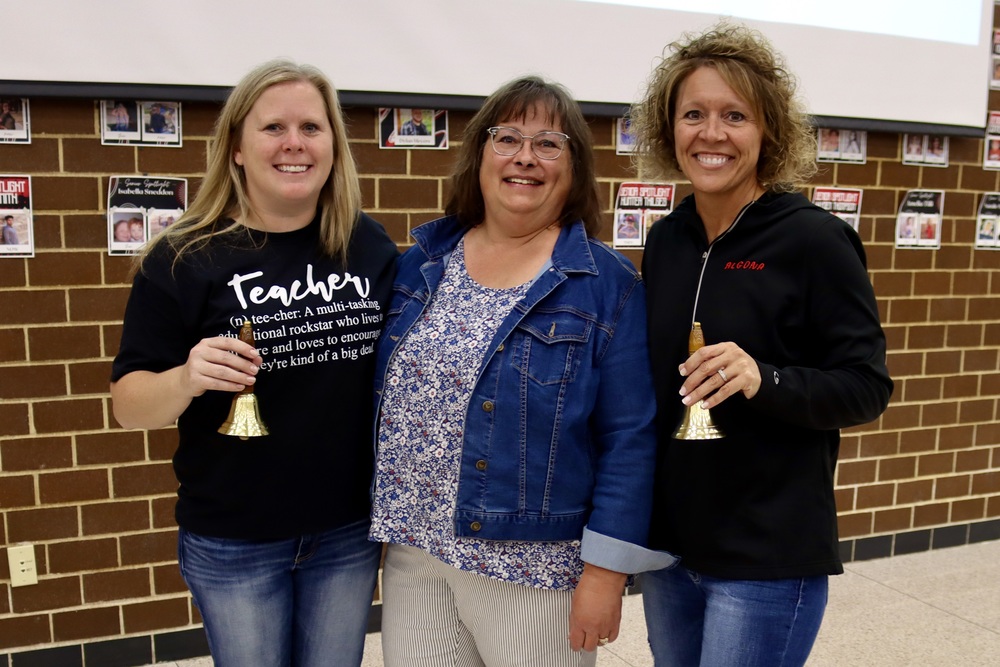 The AHS Class of ‘79 Teaching Award recognizes teachers from the Algona Community Schools each year. The award can cover one single academic year or their career as a teacher at Algona. Their outstanding contributions may include actions like developing a new program, personally motivating students, achieving greater professional standing, and going above and beyond their job description, just to name a few.

Forms could be filled out by a student, parent, or colleague. Forms were available in the Algona schools’ offices or online. After reviewing all nominees, the final selection was made by the Class Fund Committee, with help from the Algona Community School Foundation.

While this award usually goes to a single teacher, this year, Mindi Spear and Lisa Cassens were nominated together. Part of the nomination reads, “I understand that this award is usually given to an individual and not in tandem, but what these two English teachers provide to our student body is exceptional. It is hard for me to nominate one without thinking that the other is just as deserving.”

The nomination goes on to read, “Mindi & Lisa are in a league of their own when doing their jobs and constantly put the students' needs first. Each of them works tirelessly to help students get the most out of their classes. I can recall numerous times in which each of them have gone the extra mile to help a student succeed in their class. Lisa & Mindi are also the Student Senate advisors, and they are rock stars when it comes to injecting fun activities for the student body to participate in. Lisa & Mindi started Whoopcoming, which helps create some fun for the student body during the wrestling and basketball seasons in late February. Mindi & Lisa began presenting the Algonies, which are yearly light-hearted awards for the students at AHS at the end of the school year. These ladies have provided many activities for students to partake in and they help keep Algona a great place to attend school and work.”

Spear and Cassens were recognized at the end of the year staff meeting by Barb Teeter, Algona Community School Foundation representative. Both received an engraved bell and $200, presented by Janet Votteler, class of ‘79 alum. Their names will be added to the plaque of winners, which is located in the Algona Community Schools’ Central Administration office.