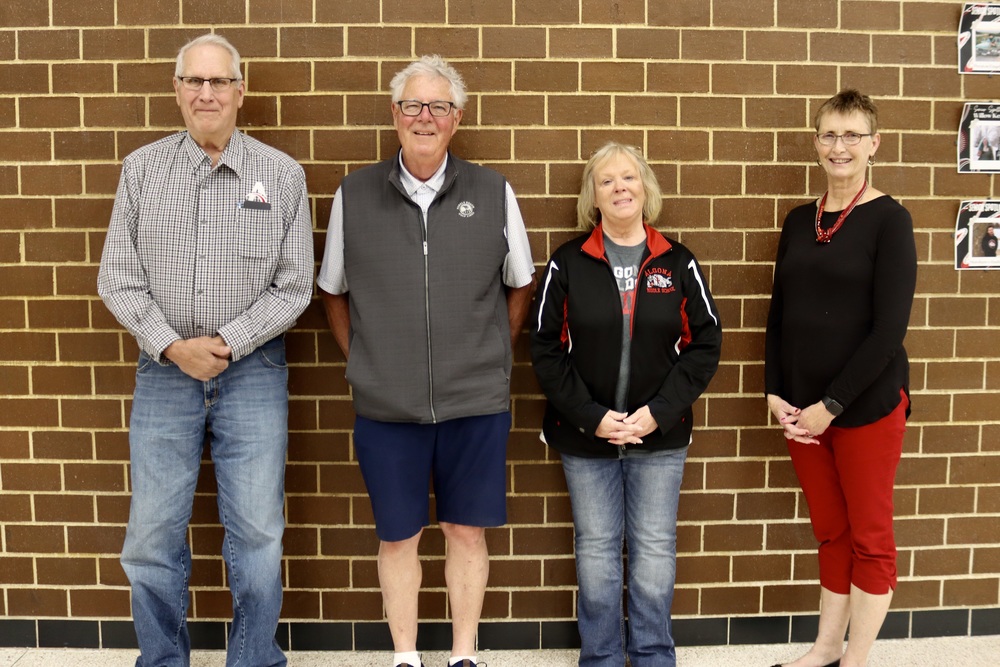 Kathy Breiner started working in the Algona Community School District in 2015 as the commons study hall supervisor and also subbed in the middle school and high school office.  Breiner later transitioned to the PAC manager and activities director secretary for a total of seven years in the district. Breiner will miss her coworkers the most and the things they did to make everything fun. Breiner says the most satisfying part about working in the school is “how quickly I started to feel a part of the community and became involved with school activities.” Breiner’s plans for retirement include moving full time to Mesa, Arizona, in early June.  She is hoping to work at an elementary school in a position where she can interact with the students. Breiner has enjoyed working in the school system in Algona and all of the friends that she has made. She is planning to visit in the summers to escape the heat and will definitely stay in touch!

Mary Beth Cooper has been working as a school business manager and board secretary since 1995 and has been working in the Algona Community School District for the past 14 years. Cooper will miss all of the employees, as she thinks of them as her working family; she will also miss seeing the kids. According to Cooper, the most satisfying part about working in the school is being able to help teachers with anything that will help make their job just a little easier. Cooper says, “Schools and education are always evolving; what might have worked in one year might not be the case down the road.”  In retirement, Cooper plans on visiting her kids and grandson a lot more and traveling.  She is also excited to get together with her siblings more often. One thing that Cooper will not miss is driving to school in the winter. On the first day of school next year, she is planning on being in Arizona. Cooper would like to thank everyone for making Algona an enjoyable place to work!!

Bruce Gervais has worked in the transportation department in the Algona Community School District from August of 1992 until May of 1998 and then again from August of 2014 until May of 2022, for a total of 14 years. One thing that Gervais will miss about working in the school is watching the kids grow up. He will not, however, miss being up at 5:00 am. On the first day of school next year, Gervais plans on sleeping in! In his years of experience, Gervais has learned that children, schools, and education have changed a lot since he was in school. Gervais describes Merrill Mueller as “the best boss that he has ever had!”

Kevin Hoover started driving bus for the Algona Community School District in 1987 and has driven bus for the district for 35 years! Hoover will miss the kids and his co-workers the most. In Hoover's 35 years of experience in the district, one thing that he has learned is that “kids are kids.”  He also has learned that he admires every elementary teacher and they do “a heck of a job!” In retirement, Hoover plans to spend time at their lake home and traveling in the winter. On the first day of school next year, Mr. Hoover just might come back and ride on bus #7. In Hoover’s 35 years of driving bus for the Algona Community School District, he had two students who rode his bus and now teach at Algona High School!  Also, for the last 29 years, Hoover has gone to Burt twice a day for 180 school days a year, making over 10,000 trips to Burt!  Hoover says that he has had a great ride, “Thanks for the fun! Once a Bulldog, always a Bulldog!”

Vickie Kaiser has been employed in the Algona Community School District, working with special education students in the middle school, for 25 years. One thing that Mrs. Kaiser will miss in retirement is getting to work with the staff who are always trying to make a difference in students' lives. Kaiser describes one of the most satisfying parts about working at the school is working with the kids. “It makes it all worth it when they are successful and proud of the things they have done,” Kaiser states. In Mrs. Kaiser’s years of experience at Algona Middle School, she has learned that not all students learn the same way or at the same time. Mrs. Kaiser describes that there are many teachers and staff who have impacted her life while working at Algona Middle School, but the one teacher who impacted her the most was Mrs. Lori Ludwig who was always there for staff as well as the students. Vickie would like to thank all of her colleagues for the encouragement, support, and kindness through the years. In retirement, Kaiser is only planning on working part-time and will spend most of her time with family and friends.

Thank you all for your years of service and commitment to the Algona Community School District.