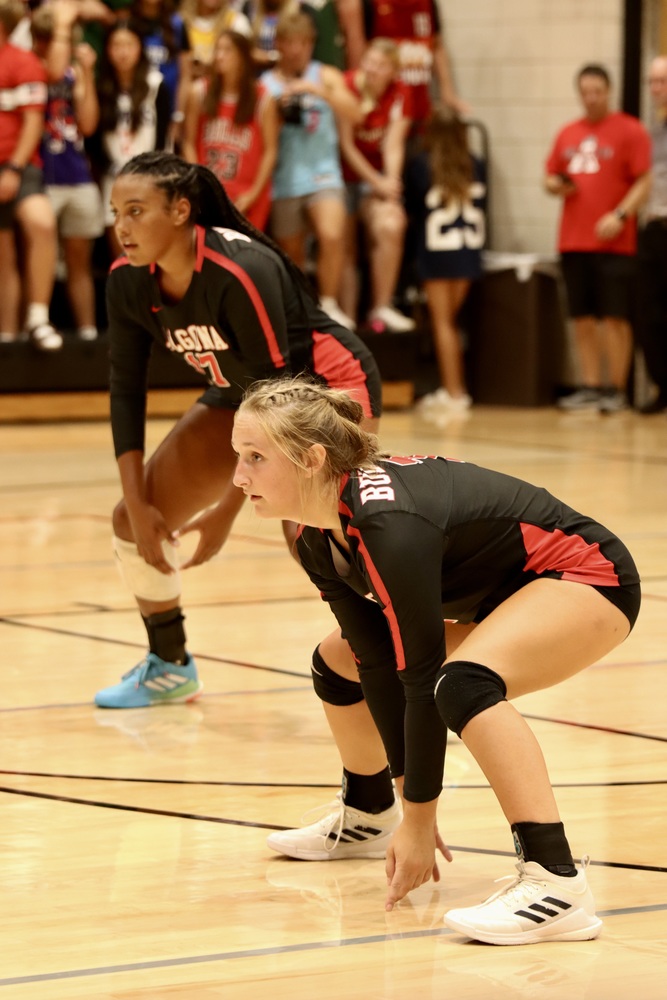 A great start to the season!

The Algona Bulldogs have had a very eventful start to the 2022 volleyball season. They traveled to Adel on August 25th and left the tournament with a 1-2 record. Senior, A’Lailah Perry, played outstanding with an average of 19 kills per set. Algona had some tough competition, playing schools that were not in their Conference and are much bigger.

The girls’ first home game of the season was against the Clear Lake Lions on September 1st. It was a very intense game, with Algona winning the first two sets, and Clear Lake followed by winning the second two sets. The 5th set for the tie-breaker was extremely close, but the Bulldogs took the victory with a win of 15-11. The Algona student section was outstanding, and many students showed up to help support the volleyball team.

The second tournament of the season was located at Algona High School on September 3rd. The girls ended the tournament with a 2-3 record and had a total of 96 kills throughout the entire tournament.

The second home game was against Saint Edmond, on September 9th, and the Bulldogs played very well, winning in three. Sophomore, Andi Jensen, had a total of 16 assists throughout the matches. Jensen says, “Volleyball has been the most team-related sport I’ve ever participated in and that’s what makes it fun!” The student section, this time in their construction themed Dawg Pound, has received multiple compliments from citizens of Algona about their effort to support the girls during their volleyball season.

On September 13th, the Bulldogs had a Pink Out home game. The girls played the Hampton-Dumont-CAL Bulldogs. The student section was completely dressed in pink, supporting the fight against breast cancer. The girls took home the victory 3-0!

On September 15th, the Bulldogs traveled to take on Webster City. Webster City came into this match with a 6-4 overall record. The Bulldogs started off slow, losing 25-11. However, they worked hard and kept the next two games tight but still lost, 25-23 and 15-19.

Next up, the Bulldogs travel to Forest City for a tournament on Saturday, September 17th. Then they host Pocahontas Area and Clarion-Goldfield for a triangular on Tuesday, September 20th.