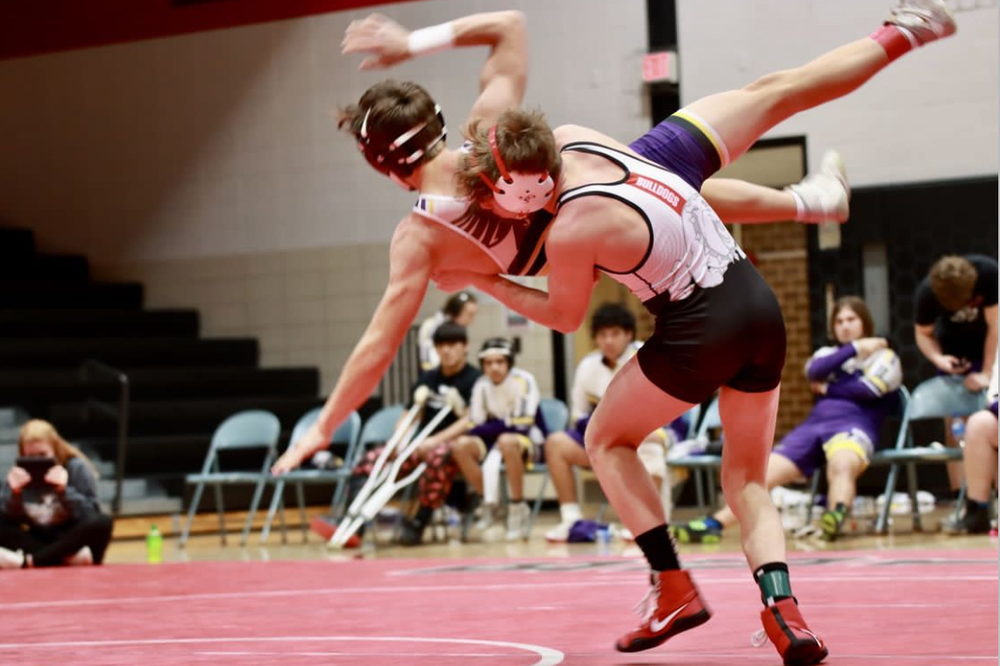 On Thursday, January 5, the Algona boys’ and girls’ wrestling teams competed. The boys wrestled at home against Clarion Goldfield Dows and Eagle Grove while the girls traveled to Nevada to compete in a scramble.

The boys ended up falling short against Clarion with an ending score of 28 to 36 and won against Eagle Grove 70 to 6. They had some great achievements throughout the night. Individuals who picked up wins were Elijah Wilhite, Isaac Wilson, Barrett Morgan, Taevyn Zinnel, Tate Slagle, Colby Jennings, Mason Allen, Ashton Moreno, Ian Fehr, Dane Kitzinger, Foster Myhre, Gavin Goche, and Cohen Reffer.

On Saturday, January 7, the boys' team traveled to Forest City to compete in a tournament against multiple schools. Placing first in their weight class was Elijah Wilhite at 106, Isaac Wilson at 120, Barrett Morgan at 126, and Tate Slagle at 138. Thomas Zabka at 113 received 2nd place as well as Ian Fehr at 152. Third-place winners were Taevyn Zinnel at 132, Colby Jennings at 160, Dane Kitzinger at 170, and Gavin Goche at 195.

Isaac Wilson, a sophomore on the boys' wrestling team, shared his thoughts about the season so far. Wilson states, “The team has been doing pretty good so far this year. We have been doing great overall as a team and also individually with several ranked wrestlers. We look to finish the season strong in the coming weeks and try to get several guys down to the State meet.”

On Tuesday, January 10, the girls’ and boys’ wrestling teams competed at Okoboji. The boys won against all three teams. The ending score against Estherville was 60 to 12, it was 50 to 24 against Okoboji, and the final score was 58 to 18 against Blue Earth, Minnesota. Picking up wins were Colby Jennings, Dane Kitzinger, Foster Myhre, Gavin Goche, Chase Roof, Jacob Zabka, Isaac Wilson, Barrett Morgan, Taevyn Zinnel, Tate Slagle, Ashton Moreno, Cohen Reffer, and Ian Fehr for the boys. For the girls, wins were picked up from Ryan Haynes, Alyssa Olson, Malyn Davis, Estrella Santiz, Megan McPeak, Jenna Stohr, Gretchen Gorham, and Abbe Gorham.

On Thursday, January, 12, the boys took on the Humboldt Wildcats. The Bulldogs ended up falling short against the Wildcats with an ending score of  21 to 37. Although it was a tough matchup, some of the boys had success. Barrett Morgan, Taevyn Zinnel, Tate Slagle, Ashton Moreno, Gavin Goche, and Cohen Reffer all picked up a win.

The boys end off this week competing in the North Central Conference tournament at Hampton-Dumont High School on Saturday, January 21. Good luck to all Algona wrestlers, and keep up the good work!