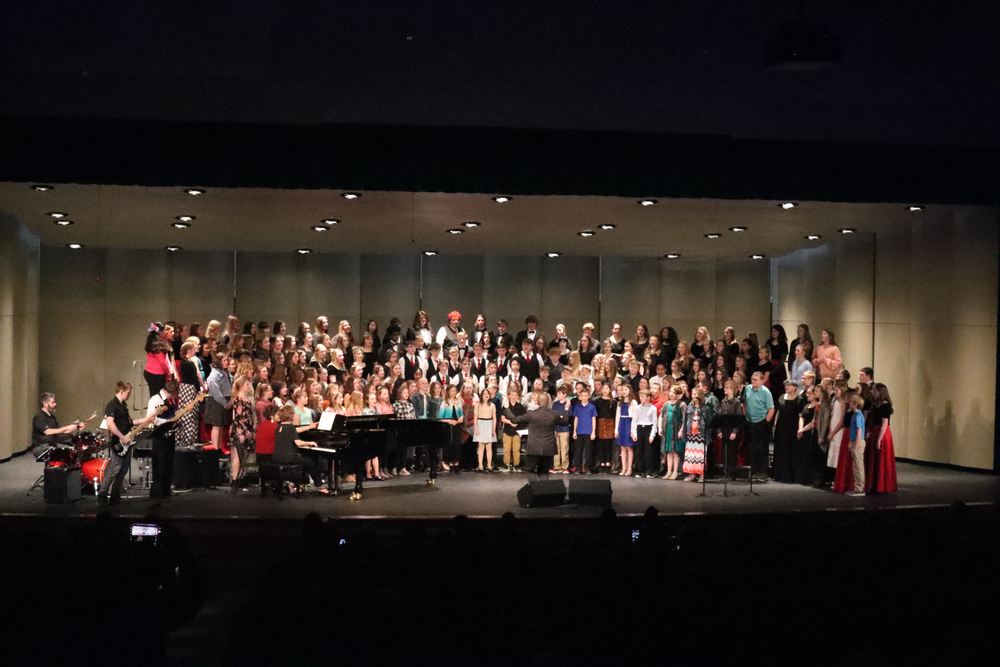 The Pops Concert was held on March 3rd, 2022, at the Wilcox Performing Art Center, starting at 7:00 pm. Middle school and high school choirs performed at the Pops Concert.

The directors of the choirs at Algona schools are Marisa Merkel for the middle school and Adam Orban for the high school. The accompanists are Sheila Black for the middle school and Trevor Green for the high school. The fifth grade choir performed “It’s All Right” by Robert T. Gibson and “When the Party’s Over” by Mac Huff. Featured soloists in the fifth grade were Haylen Wellman and Olivia Adams. The sixth grade choir performed “The Middle” by Ryan James and the soloists were Brody Sudol and Karlee Kahler. They also sang “10,000 Hours'' by Jack Zaino, and the soloists were Landon Menning and Regan Jensen. The seventh and eighth grade choir performed “Home” by Alan Billingsley, featuring soloist Mada Steburg and instrumentalist Maya Lentz. They also performed “Sound of Silence'' by Mac Huff and the soloists were Nathan Reebenacker, Owen Orban, Josiah Youngren, Kennedi Blair, Reese Taylor, Natalee Reemtsma, and Ryah Haag.

The songs the middle school choir performed were “Route 66'' by Roger Emerson and the soloist was Brooklyn Adams, “Blackbird” by Audrey Snyder and soloists were David Kissinger and Owen Orban, and “Oye Como Va” by Kirby Shaw.

Algona High School students performed “Ophelia” by Adam Orban and the soloist was Sydney Seebecker, “Sign of the Times" by Mark Brymer and the soloists were Tiffani Schutter, Sarah Mawdsley, Adeline Reynolds, Jazmin Wiederin, Hannah Severson, and Remi Schaffer, and the guitarist was Zach Lachney. They ended their set with “Sweet Caroline” by Alan Billingsley.

Make sure you catch the next Algona High School concert on May 10, 2022, for their spring concert and awards.